Behind the Scenes at the Smithsonian Natural History museum

I have a good friend who was a Congressional Fellow some 25 years ago, and he has mentioned to me several times that the most memorable experience he had during his fellowship year was going behind the scenes at the Smithsonian.  He asked me a few months ago if I had done anything like that, and I replied, “No, no one has organized it.”  He said, “Maybe you should do it.”  I think that was downright mean, since anyone who knows me knows that I can’t resist an organizational challenge!

It took a bit of work to figure out the right path in, but ultimately, I was triumphant.  On Friday, the Nerd Pack of Congressional Fellows converged on the Museum of Natural History.

Our first visit was with a volcanologist, who showed us the various methods she uses to simulate the conditions in a volcano.  She doesn’t study the volcanoes themselves, she uses them as sample collectors since they throw pieces of the Earth’s mantle from deep underground up onto the surface.  She can compare the results of her experiments with the Smithsonian’s vast collection of samples from around the world and look for similarities and differences.  That is one of the greatest strengths of the Smithsonian is that its collection of samples is unrivaled worldwide.   There is also the expectation that the collections in the museum will never be sold or destroyed, so these samples are the gold standard for references.  The Smithsonian ships samples around the world for comparison, each with an ID tag, so that scientists can cross-reference what they have learned about each item.

After that short stop, we went to the highlight of our tour, which was the gem and mineral collection, better known as the bling.  Security was obviously much tighter in this area, and one of the challenges we faced was getting fifteen people through the security doors in under 30 seconds, when the alarms start going off.  We took it as a challenge, and we were successful every time.  Apparently school groups sometimes get carried away and careen into their guides as they try to pass through each door in less and less time. 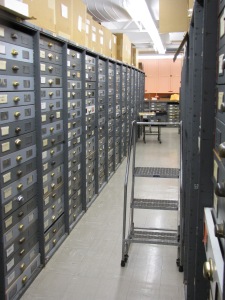 Our first stop in this area was the mineral storage area, which involves cases and cases of minerals.  The photo shows just half the length of the room and just a single aisle, so it’s very extensive.  Each drawer contains a collection of minerals which are each tagged and are sent around the world as needed, just as the volcanic samples are. 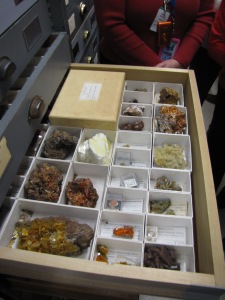 Just one drawer of minerals

One curious feature of these cases is that each case had evidence tape strapped across it.  When we asked, our guide explained that at some point, the heating and ventilation system needed to be revamped in the room.  Since these are effectively cases filled with rocks, no one really wanted to move them.  The cases were covered up, but there was still some concern that the workers not be tempted to obtain souvenirs.  Evidence tape is designed to break easily but be very difficult to scrape off, so it was used to make detection of tampering extremely obvious.  That worked beautifully during the construction, but now all of the cases still have the evidence tape because it is not worth the effort required to scrape it all off.

Our ultimate destination, through another pair of 30 second doors, was the gem vault, which was amazing.  Around the sides of the room were cases of magnificent mineral samples with larger samples simply placed on the floor.  In the center was a large workspace, on which a number of samples had been collected.

a malachite bowl on the floor

Every year, the gemologists at the Smithsonian attend the Tucson Gem and Mineral show, and we were seeing their preparations for that event.  The theme of the show this year is fluorite, so we got to observe fluorite in all of its many forms.  Fluorite, CaF2, or calcium fluorite, is actually colorless when grown in the laboratory, but in nature, impurities provide a rainbow of colors.  The clarity of the fluorite gemstones was astonishing, as was the size.  The largest stone in that collection was larger than my fist. 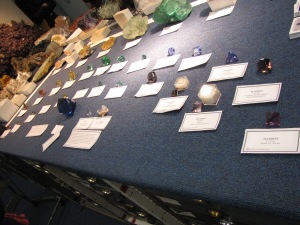 The big fluorite in the middle.

Fluorite not clear enough to be cut as gems was also featured.  I liked the huge chunk of rock that came from a zinc mine.  The fluorite crystals were not useful to the miners, but they were convinced to remove the whole slab and eventually the Smithsonian acquired it. 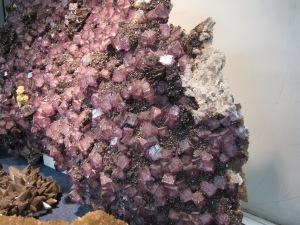 Fluorite crystals in a zinc deposit

Sometimes conditions change as a mineral is crystallizing, which can lead to different colors if the identity of the impurity changes.  Fluorite is particularly well known for this effect.

the stripes occur because of changing crystallization conditions

When we asked how they were transporting all of their samples to Tucson, they explained that the most precious were often sent via Dunbar, the armored car company, which deposits the samples directly in a vault when they arrive.  Other samples are sent with lots of insurance via FedEx.  We first thought that perhaps the scientists would put the most precious samples in their carry-on luggage and hand carry the cargo, but they explained to us that since most of the team has been attending they show for many years, they are well-recognized, and they want to avoid the temptation of other people to make off with the samples.

There were too many of us to go into the inner vault, but our hosts brought out some pieces to share.  The Smithsonian sets out to collect gems, not jewelry, but since many of the gems are already set, the jewelry is part of the package.  In addition to the beauty of the samples, it was obvious that the stories that accompanied each piece were particularly appealing since they set the item in a historic, fashion, or financial context. 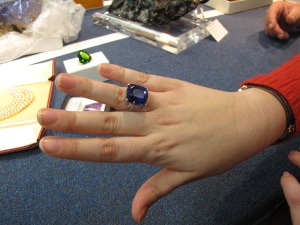 One way of paying your taxes

For example, one story involved a man who had gone to the IRS across the street to try to settle the taxes on his mother’s estate.  Needing a sizable tax write off, he came over to the Smithsonian and asked if they were interested in this sapphire ring.  They looked at it, decided that they liked it, and the man donated it on the spot. 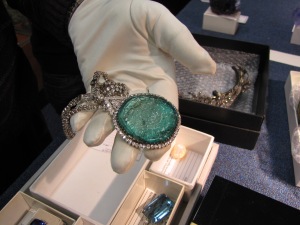 A slice of emerald

The green stone in this pendant is an emerald sliced from a larger stone and then carved.  There are tiny pin holes drilled in the stone that indicate that the jewel was at some point stitched onto a garment such as an armband.

This nugget of gold was obtained when the price of gold was particularly low.  The idea was that it would be a nice item to hand around when they were doing outreach.  Unfortunately since gold is now worth substantially more, the nugget tends to be kept closer to the museum. 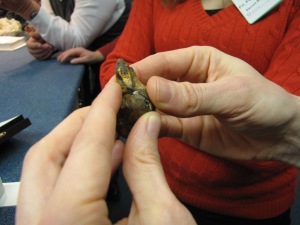 One of the favorite items of our guides was this small slug of iron from Austrailia.  When sliced carefully down the middle, it revealed a rather spectacular opal. 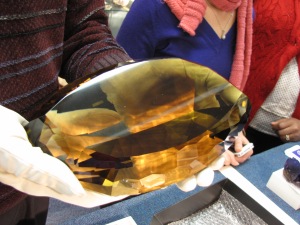 I was particularly impressed by this enormous citrine, which is one of the largest gemstones in the world.  What we found to be even more entertaining was that it was shipped in a denim bag, obviously made from the leg of a blue jean.  Our host says he always imagines the original seller wandering around wearing jeans that have just one leg.  The gem is so heavy that it obviously needed a more robust than normal fabric to contain it.

Our guide could have told stories forever, but we finally had to go on our way.  Passing through the five separate 30 second doors to return to the exhibit halls was easy since we had become old pros.  It was most definitely worth the organizational challenge.